The Benefits of Alpha Lipoic Acid

Alpha Lipoic Acid is also called thioctic acid or just lipoic acid and abbreviated ALA — but don't confuse it with the other ALA, alpha linoleic acid – which is an omega fatty acid. Alpha lipoic acid is a compound found naturally inside every cell in the body. It's needed by the body to produce the energy for our body's normal functions.

Alpha lipoic acid is also an antioxidant, a substance that neutralizes potentially harmful chemicals called free radicals. What makes alpha lipoic acid unique is that it functions in water and fat, unlike the more common antioxidants like vitamin C and E.

You know we can’t talk enough about the benefits of lowering inflammation! Abnormal inflammatory responses contribute to diseases such as diabetes, pain, Alzheimer’s, multiple sclerosis, and many many other diseases.

Europe has licensed alpha-lipoic acid for the treatment of neuropathy (nerve damage). It has been shown to improve symptoms such as stabbing, burning, the feeling of limbs and/or toes being asleep, numbness, and prickling sensations. It is suggested that it is best to take 600-1800 mg of alpha-lipoic acid per day (lower doses do not work for nerve pain) for neuropathy, and to give it time as it may take up to 4-6 weeks before feeling results.

Not only does lipoic acid improves the quality of life in patients with neuropathy, it also has shown that it decreases sciatic pain caused by a herniated disc, relieves chronic neck pain, and reduces symptoms and impairment from carpel tunnel, as well as reducing postoperative pain after carpal tunnel surgery.

Research suggests that taking alpha-lipoic acid for 8-48 weeks can reduce body weight in people who are overweight. Even without dieting, lipoic acid can greatly improve glucose and fat metabolism resulting in more sugars and fats being broken down in foods and used for energy instead of being stored as fat. This was shown to also results in the urge to eat less.

Lipoic acid has also shown to inhibit the production of chimeric, a molecule that is associated with obesity and metabolic syndrome.

Lipoic acid has a beneficial effect in preventing hypertension by lowering the level of inflammatory cytokines in the blood, thus preventing pathological changes to blood vessel cells and normalizing changes in blood pressure.

When lipoic acid was given daily to patients with dementia, the progression of disease was slowed. Another study showed that patents with AD lipoic acid led to a stabilization of cognitive functions.

In patients with migraine, lipoic acid has shown the ability to reduce the frequency, duration, and intensity of migraines as it help with both mitochondrial disorders and oxidative stress, both linked to migraines.

Lipoic acid also improves the effectiveness of the migraine drug, topiramate while helping reduce the side effects of the drug. (R). The combination of lipoic acid and topiramate was significantly more effective at decreasing the frequency and duration of migraines than when just taking the drug alone.

15. Lipoic Acid May Help Those with Parkinson’s Disease

Lipoic acid has been shown to be highly effective at suppressing and treating MS. It has been shown to have anti-inflammatory effects in patients with multiple sclerosis (MS), and may be useful in treating MS by inhibiting activity that interferes with T-cell migration into the brain/spinal cord, and reducing Th1 and Th2 cytokines.

In high risk pregnancies, lipoic acid can speed up the return to normal pregnancy conditions and improve the conditions of both the mother and the fetus (R). Additionally, smaller number of miscarriages was recorded with lipoic acid supplementation (R). Lipoic acid decreases inflammation in women with gestational diabetes and reduces cervical inflammation after an episode of preterm labor.

Lipoic acid has been been shown to increase total sperm count, sperm concentration, and mobility In infertile men.

Acts as a Powerful Antioxidant

Removes Toxic Metals from the Body

Can Help Reduce Side Effects of Antipsychotics

Can Protect Your Eyes and Vision

May Help with Ulcers

May Help with Inflammatory Bowel Disease

The Alpha Lipoic Acid That We Recommend: 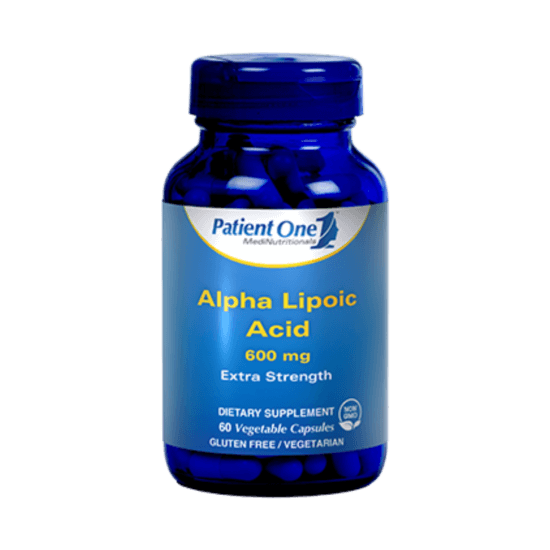 An oral dose of 600 mg once daily appears to provide the optimum risk-to-benefit ratio, however; larger doses up to 1800 mg can be taken as advised by your health practitioner.