Historically, our knowledge of the use of Oregon grape came from First Nations peoples. Based on collected ethnographic information, we know that Native American tribes utilized all species of Oregon grape (Moerman, 2009). The Blackfoot, Karuk, Okanagan-Colville, Samish, Sanpoil, Squaxin and Thompson tribes utilized the roots and branches for addressing a variety of ailments. According to Moerman (2009), the Blackfoot and Sanpoil used a decoction of the roots as a gastrointestinal aid, while several others including the Keres, Okanagan-Colville, and Samish used a decoction of the roots as a tonic for preventing illnesses. Moerman (2009) describe the Okanagan-Colville, Squaxin, and Thompson tribes using a decoction of the peeled and chopped root bark for cleaning the blood. The Sanpoil and Thompson tribes used an infusion of the stems and bark as a wash for red, itchy eyes (Moerman, 2009). The fruit was also used as a food and the bark, stem, and leaves used as a dye for fabrics (Davis, 2017). Native American tribes in Washington State, where it grows profusely, used both B. aquifolium and B. nervosa for a variety of conditions similar to other Native American tribes (Gunther, 1973). Gunther (1973) described how the Swinomish and Samish tribes made a tea of the root for a general tonic and the Sqauxin used a decoction as a gargle for sore throats. Both tribes drank a decoction of the roots for a spring tonic to purify the blood. The use of B. nervosa by Native American tribes included eating the berries for shellfish poisoning and cautioned use, based upon the perception that Oregon grape was very potent (Pojar & MacKinnon, 1994). Western settlers to the frontier learned of the value of Oregon grape from Native Americans and incorporating it into their home remedies. A popular beverage marketed in the late 1800’s was made from Oregon grape and used to relieve jaundice (Kowalchik et al., 1987).

Antimicrobial: Due to its disinfectant and antimicrobial properties, Oregon grape has been used for abrasions, and has addressed a wide variety of conditions including nail fungi, or used internally for bacterial or mold induced sinus infections, eye infections, vaginal infections, wounds on the skin, infections of the mouth, inflammatory bowel conditions, infections in the upper digestive tract (h. pylori), urinary tract infections, sore throat, infectious diarrhea (giardiasis and other parasites). Oregon grape is useful in damp heat conditions, including cases of inflamed skin eruptions such as athlete's foot, ringworm, and jock itch. Oregon grape’s berberine content is proven effective against specific bacteria including E. coli and Methicillin-resistant Staphylococcus aureus (MRSA), along with an antimycotic action against Candida and Aspergillus. Davis (2017) suggests using a topical wash with Oregon grape for staph infections and MRSA. Garran (2008) suggests using a decoction of Oregon grape in a sitz bath or as a douche for cases of damp heat vaginal conditions.

A constituent of Oregon Grape Root, berberine, is being studied because it contains a specific multi-drug resistance pump inhibitor (MDR Inhibitor) named 5′-methoxyhydnocarpin (5′-MHC) and could make a significant impact on MRSA  A simplified view of how MRSA works in the body is that it has a pump in its cell and when antibiotics enter that cell the pump immediately pumps out the antibiotics so it can have no effect on the MRSA cell.  5′-MHC, which is derived from berberine-containing plants like Oregon grape root, stops that pumping action so the antibiotics can have an effect on the MRSA cell.  Some herbalists are using Oregon grape herb alongside antibiotics to increase their effectiveness against this deadly infection and drug companies are racing to patent this as a pharmaceutical drug.

Eczema and Psoriasis: Oregon grape is long known for its ability to address chronic scaly skin conditions (Hoffmann, 2003), including psoriasis and eczema. It has shown to be useful in cases of intractable moist eczema, dandruff, acne, and pruritus (Elllingwood, 1919). Kane (2017) points to Oregon grape’s ability to slow excessive cellular proliferation and lipid peroxidation in cases of psoriasis. Combining Oregon grape with buckbean (Menyanthes trifoliata) in cases of dry or scaly skin, eczema or psoriasis may be more beneficial than Oregon grape alone. Combining the use of Oregon grape internally and externally in cases of systemic skin conditions might achieve Brinker (2005) noted that topical use of Oregon grape for psoriasis has two advantages in that it allows direct contact of the alkaloids to affected tissues and addresses compliance issues based on its bitter taste.

Liver Detoxification: Oregon grape, like other plants with berberine, has a specific effect on the liver. Its bitter taste has a stimulating action upon the liver and can be helpful for those with constitutional impaired hepatic function. Many herbalists view Oregon grape as a gentle hepatic-biliary stimulant that increases the flow of bile through the liver and gallbladder, enhancing its blood detoxification properties. Kane (2017) writes about its ability to normalize liver enzyme elevations and the inflammatory response in association with hepatitis, cirrhosis, and liver toxicity. Tierra (2003) suggests combining it with dandelion and fennel for cases of jaundice, enlargement of the liver and spleen, gallstones, and arthritis. Kane (2017) suggests combining Oregon grape with desert parsley (Lomatium dissectum) to assist in supporting liver function.

Blood Purifier: Oregon grape can help to improve or alter our body's ability to function by increasing blood flow to the tissues, thereby detoxifying the blood, particularly in cases of infections, inflammation, arthritis, cancer and skin eruptions. Kane states that Oregon grape was viewed as a classic alterative to address “bad blood” comparable to both echinacea and stillingia. The Spanish used Oregon grape known as yerba de la sangre or “herb of the blood,” for cases of syphilis. Tierra (2003) confirms the use of Oregon grape for its detoxifying actions to assist in clearing the body of toxins and poisons.

Constipation and Sluggish Digestion: When the liver isn’t functioning optimally, digestion can be slow, causing constipation, exhaustion, and weight gain.  The inability to digest fats, bloating, gas, hemorrhoids and constipation can all be attributed to issues relating to the liver. I often add small amounts of Oregon grape root as part of my bitters blends to help move the liver in the case of sluggish digestion.

Other Uses: Herbalists use Oregon grape for a variety of other conditions including fibrocystic breast disease, uterine fibroids, autoimmune inflammation, chronic allergies, psoriatic arthritis, and lupus.  Oregon grape root has been used for headaches that start in the occipital area and spread over the right side of the head to the eyes, with temporal throbbing, pointing to its effect on the liver.  Combining Oregon grape with chaste berry, cramp bark, dang gui (Angelica sinensis), and ginger to to balance premenopausal symptoms.

In promising new research, findings suggest that berberine may play a positive role in addressing Alzheimer’s disease and improving cardiovascular health. Several studies are exploring the role that berberine might have in limiting the formation of amyloid plaques and neurofibrillary tangles, factors implicated in Alzheimer's disease (Cai et al., 2016). As further research is undertaken on the potential neuroprotective role of berberine, there is speculation that it might apply to other neurological disorders. Still other research indicates that berberine has positive cardioprotective effects in cases of hypertension and hypertrophy (Li et al., 2014). In a recent study, berberine had the effect of inhibiting atherosclerosis related to regulating lipids, anti-inflammation, and blood sugar regulation (Wu et al., 2010).

Oregon grape is very bitter tasting, which makes it effective on the liver, but can discourage compliance in taking the herb as directed. Increasing the palatability may increase compliance by combining Oregon grape with equal parts of a tincture mint, or licorice.

Oregon grape root excels at treating infections and improving a sluggish liver. While it can be used as a simple herb (alone), it is often formulated to target specific needs or to increase taste.

Sustainability Issues: Oregon grape herb was added to the United Plant Savers to watch list in 2014, and remains on the list today. Oregon grape is being threatened with over-harvesting due, in part, to the florist business. Those green leaflets stay vibrant-looking long after they are picked, making them very desirable for arrangements. Keep an eye on your local plants and report any illegal harvesting that you see.

Harvesting Guidlines: When harvesting Oregon grape root for your personal use, learn how to harvest it sustainably. Horizontal and somewhat superficial rhizomes can be sparingly harvested from the plant, leaving the remaining plant to grow.

Collect the roots and lower stems of Oregon grape from mid-summer to winter (Moore, 1993) before the plant has flowered or after it has fruited. Kloos (2017) advises gently pulling the stem until you can cut the root free or until it pulls away, then replanting the crown of the plant after harvesting the roots. Leaves are collected May through mid-fall (Moore, 1993). For those harvesters who observe the phases of the moon, harvest the plant bark during the three-quarter waning moon (Green, 2000). Berries are collected when ripe and used fresh or dried.

Oregon grape is contraindicated in cases of either emaciation or weak digestion. Use with caution during pregnancy (Easley & Horne, 2016). Berberine, a constituent found in Oregon grape, can cause hemolysis in babies with G6PD deficiency (Kane, 2017). Like other cholagogues, do not use this plant if there is a gallbladder blockage (Kane, 2017).

Other contraindications include lactation, bile-duct obstruction, septic cholecystitis, hepatic cancer, other hepatocellular diseases, hyperthyroidism, and acute inflammation (Alfs, 2003). Information from a systematic review of scientific literature indicates that berberine is found to decrease the efficacy of many herbs, supplements, and drugs (Berberine, 2008) 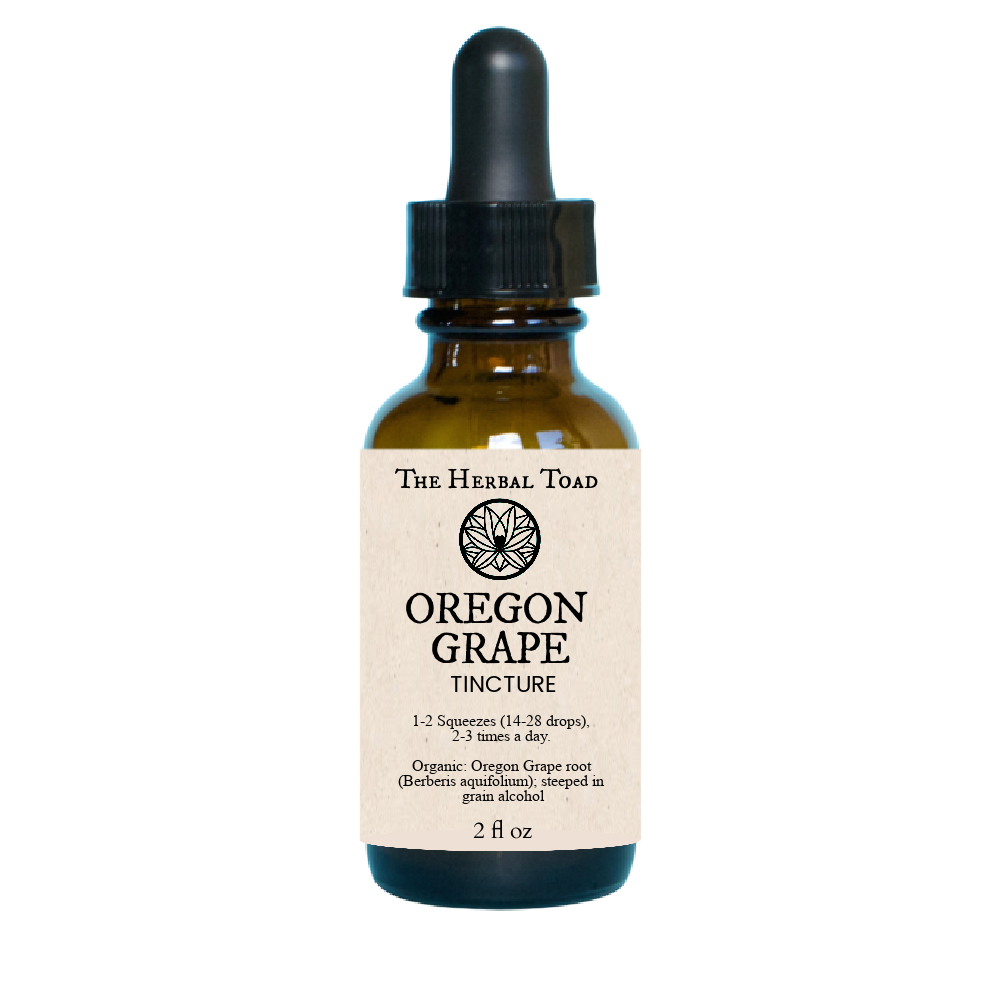 Herbal alternatives are not meant to be a replacement for care under a qualified health professional, but should be discussed with your doctor and considered a complimentary modality, especially when pregnant, breastfeeding, or taking prescribed medication. Keep out of reach of children. This information is for general research purposes only and has not been evaluated by the FDA and is not intended to diagnose, treat, or cure any disease. The user of this material is solely responsible for determining fitness for any particular use and complying with all applicable laws and regulations.